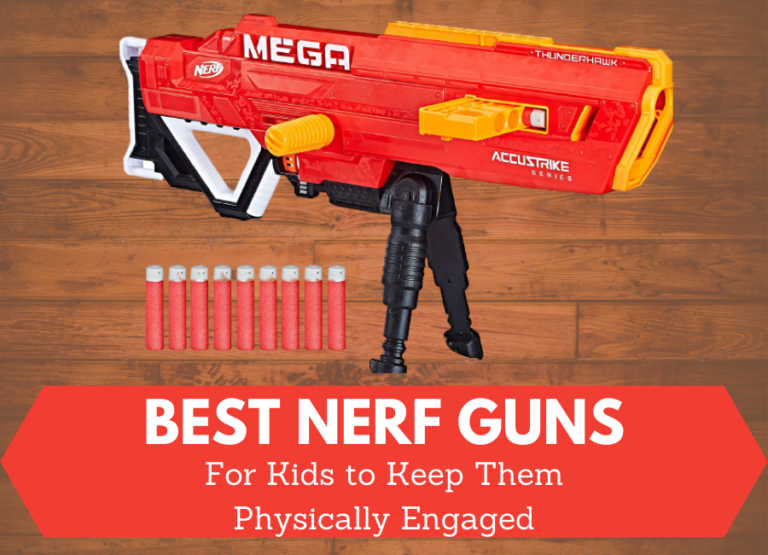 Nerf guns have been pretty famous with not only this generation but even with the people born in the last century. It’s not hard to see why though, Nerf guns offer adventure-packed action to both kids and adults as what’s more fun than shooting a few harmless pieces of foam to your sibling. Or maybe all some kids want is to aim at things far across their room and scream in satisfaction when they knock them down with their perfect shot. Regardless of how they are used, the best Nerf guns are filled with lots of action and fun.

Long gone are the days when nerf guns used to be simple as the nerf guns of this generation are filled with more darts shooting capabilities, more features, and overall better performance. They still retain their neon-colored look though, staying true to their traditions. So let’s dive in and explore the best nerf guns for kids out there!

Do you know what’s more famous than Nerf guns right now? The free-to-play battle royale by Epic Games, Fortnite. Kids are so into Fortnite these days so why not get a Nerf gun that is a replica of the TS-1 Blaster in the battle royale game? Similarly to Fortnite is not the only selling trait if this Nerf gun. It also features a pump-action through which you can shoot not 2 or 3, but 4 nerf darts rapidly. Don’t worry about running out of ammo either as the TS-1 Blaster can store up to an additional eight darts which means you will have an overall number of 12 darts to play with.

When you first look at the N-Strike Mega Series RotoFury Blaster, you will feel how imposing it is. Being a hybrid of a grenade launcher and a rifle, the RotoFury Blaster will give you that well-needed edge to secure victory from your enemies. This Nerf gun can house about ten darts, which is surprising considering how small the cylinder looks compared to other Nerf guns. It also comes with a Slam Fire action feature which will help you knock off your enemies in succession.

The RotoFury Blaster has vibrant colors like many other Nerf guns and produces a whistling sound after each shot is made. This Nerf gun is also great for both long-distance shots, and those adrenaline-filled close fights.

If your child wants a Nerf gun that is big and imposing, then the Thunderhawk Nerf AccuStrike Mega Toy Blaster is the perfect choice as it’s one of the longest blaster models you can get your hands on. The size of this thing is amazing as it measures about an exceptional 41 inches. 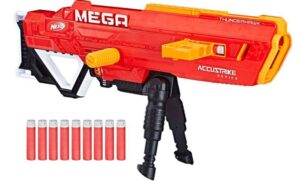 This gun is fully automatic thanks to its internal motorized design. This means your child can shoot your darts at an extremely fast rate. Moreover, It has an impressive 50 dart drum. Your child will also have no problem carrying the gun around since the Elite Titan CS-50 Nerf Gun comes with a durable strap. Extended periods of play will also cause no issues since the grip handle comes with an anti-slip feature.

Also invest some money in useful accessories for your toddler or kids such as the best step stools will come in handy, they will help the kid walk on his own. The kid will also learn how to move his body around on his own accord.

The Zombie Strike FlipFury Blaster comes with a capacity of 12 darts and two blasters. The gun is also easy to use, making it perfect for children around the age of eight. Moving around the battlefield will also be no problem for your child since the gun weighs less than two pounds. So if you are looking for a gun that has the looks of those powerful nerf guns but is also light enough to carry around then the Zombie Strike FlipFury Blaster will be a great choice.

Buy great accessories for your kids’ bedroom such an approved toddler pillow will assist a great sleep and comfort for your kid at night.

This nerf gun has everything you need to stop the zombie apocalypse. The gun looks and feels like a nerf gun that can hold a lot of darts, but the NERF Zombie Strike BRAINSAW Blaster has the capacity for holding a single dart at a time. The reason we have this nerf gun in our list is because of its rotating zombie-killing sawblade that can be found on the front side of the Blaster. The NERF Zombie Strike BRAINSAW Blaster has a lot going on in terms of looks which makes it perfect for your child if that’s what he/she wants.

If you often take your kids out as you head to a supermarket or hang out during the day, you will notice that toddler car seats are a must-have accessory. The seat can be tucked inside the car or truck without having to worry about anything. Your kid will be able to sit safely in the padded seat throughout the road journey.